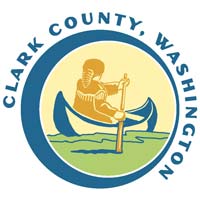 Effective immediately, all land clearing burning in Clark County will be restricted due to increased fire danger. A statewide burn ban was issued yesterday by the Washington State Department of Natural Resources for state forests, state parks and forestlands under state protection. Similar burn bans are in place in both Skamania and Cowlitz counties.

Clark County Fire Marshal, Jon Dunaway, is canceling all burning permits issued this year. Permits can be reissued or extended when the ban is lifted. The burning restrictions do not apply to federally managed lands.

Clark County typically bans outdoor burning from July 15 through Sept. 30 each year. However, in extreme fire hazard conditions, a ban can begin sooner or end later.

“Looking at the current conditions along with the extended forecast, I feel we need to implement this ban immediately,” said Dunaway. “The mild winter and dry conditions warrant extra vigilance this year.”
Creating a defensible space around homes is important in preventing fires. Dunaway recommends these actions in both rural and urban areas:

Within 3-5 feet of foundations, outbuildings, garages and sheds
Within 10 feet of your house
Under decks and porches
From gutters, eaves, porches and decks

· Cut your lawn if it is brown. Dispose of debris and cuttings.
· Prune trees so lowest branches are 6-10 feet above the ground.
· Landscape with native and flame-resistant plants.

· Recreational fires must be in metal-, stone- or masonry-lined fire pits in improved campgrounds or purchased from home and garden stores.
· Size may not exceed 3 feet in diameter by 2 feet in height.
· Fires must be at least 25 feet from a structure or other combustible material and have at least 20 feet of clearance from overhead fuels such as tree limbs, patio covers or carports.
· Fires must be attended at all times by a responsible person at least 16 years old with the ability and tools to extinguish the fire. Tools include a shovel and either five gallons of water or a water hose connected and working.
· Portable outdoor fireplaces, also known as patio fireplaces, should not be operated within 15 feet of a structure or combustible material. They must always be used according to the manufacturer’s instructions.
· Completely extinguish recreational fires by covering them with water or moist soil and stirring with a shovel until all parts are cool to the touch.

Self-contained camp stoves are a safe and easy alternative to camp fires for cooking.

For more information, please contact the Fire Marshal’s Office at (360) 397-2186 or visit the county’s website at http://www.clark.wa.gov/development/fire/burning.html.