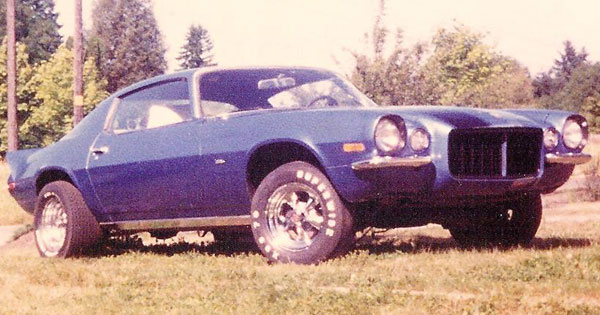 You’ve likely heard some of the hubbub surrounding what’s happening around one of Summer’s most popular events – Cruisin’ the Gut. We received some information from the event organizer which lays out what happened to the event and what might be happening next.

Having spent *years* of my youth cruising those very same streets – ah, the old ’71 Camaro, shown sans engine during a rebuild – oh, to have that one back… sigh :) – this event was a real joy to watch unfold each year. I’m really disappointed it came to this, and I am hopeful that the folks at the City see the benefit of extending the same financial support to this event as they do for the arts, music, theater and other important events happening in the downtown core.

Here is the release from Phil Medina, the man behind the enormously popular event.

Cruisin’ the Gut is a community event with the specific goals of reliving the glory days of cruising, raising food donations for Share Vancouver and helping the businesses in Downtown and Uptown Vancouver thrive. Cruisin’ the Gut remains successful and growing as the biggest revenue-generating day of the year for many businesses in and around downtown Vancouver. The event is completely run by Phil Medina and a large crew of faithful volunteers and car clubs reaching well beyond the City of Vancouver with guests from all over the USA and Canada.

The City of Vancouver is requiring the wrong type of liability insurance and therefore the event is not insured properly. He has raised concerns year after year and his only request has been that the City explain how this coverage pertains to his event and work with his insurance company to apply the correct type of liability insurance. Cost is not the concern, inappropriate coverage is the concern.

The second issue is related to the Vancouver Police Department services. Phil is required by the City of Vancouver to pay for 50% of the cost for police services as of 2015. The City has agreed to pay for 50%, or up to $8,000.00 of the cost to police the event. However, Phil does not receive the cost of police services prior to filing the permit. The City wants Phil to file a permit, which requires him to agree to pay an undisclosed expense that grows enormously every year.

At this point, Phil cannot even get the City to evaluate the insurance and discuss the details with him. He met one time with the City of Vancouver, on May 5, 2017 and told the City that he was not willing to file a permit for this year’s Cruisin’ the Gut, unless the City would look at taking on 100% of the police services as they did for 2011, 2012, 2013 and 2014 events and evaluate the extra insurance requirement to ensure the event is properly insured.

Phil has asked the City to be a major sponsor of Cruisin’ the Gut by paying for the police services, as they have done in the past. Phil believes the City is one of the major monetary beneficiaries of this event and should play a larger role as the sponsor city that currently enjoys this event. Secondly, he wants the Risk Management Department and Vancouver Parks and Recreation to evaluate and meet with him and his insurance company to make sure the event is insured properly.

Politics is what Phil is up against. The City has responded via email to Phil’s requests from the May 5th meeting and stated that the extra insurance will be required and will not be discussed and that the offer for police services would be the same as 2016, adding that Phil should consider “instead of a moving event for 2017, have Cruisin’ turn into a car show,” apply for lodging tax to help with the 2018 Cruisin’ the Gut cost for Police services, or to “think about having the City, for 2018, be the official organizer and sponsor of Cruisin’ the Gut.”

This raises concern that the City will consider taking over the event, but will not consider playing a larger role with the event owner to properly secure and insure the event. The City of Vancouver has the responsibility and obligation to drive commerce to the streets of Downtown and Uptown Vancouver. However, the single largest and most successful event to accomplish that goal, that is not run by the City of Vancouver, is being canceled because the City is unwilling to be a bigger partner and engage in discussions related to two specific issues.

Phil has thousands of supporters and volunteers that help him year after year pull off the single, largest event in downtown Vancouver. Phil started Cruisin’ the Gut because he loves cars and wanted to resurrect the glory days of cruising, all the while helping the city he grew up in and is now raising a family in succeed and prosper.

He will continue to run Cruisin’ the Gut, but whether it’s in the City of Vancouver is what appears to be in jeopardy.