Having Fun While Doing Good During Give More 24! 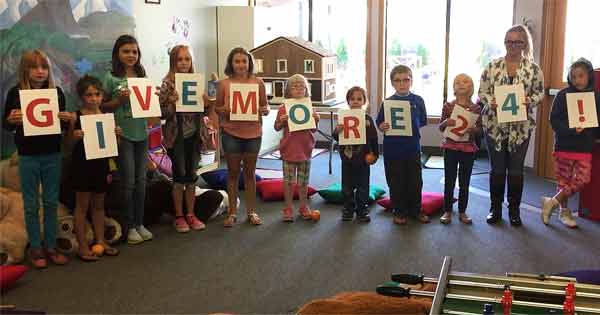 The Community Foundation for Southwest Washington has scheduled its sixth-annual Give More 24! day of giving for Thursday, September 19, 2019. The event runs from midnight to midnight and encourages local residents to join forces and give something more to local causes for 24 hours.

As the event’s name implies, gifts can actually give more during this 24 hour period. This is made possible thanks to hundreds of thousands of dollars in matching funds provided by individuals and businesses in the community. Nineteen $1,000 prizes will also be awarded to nonprofits based on specific goals and timeframes throughout the day. Prize and match details can be found online and donations must be made through the event’s website givemore24.org in order to receive the eligible match.

In conjunction with Give More 24!, participating nonprofits have planned more than thirty entertaining, and sometimes quirky, events for Thursday, September 19. This year’s lineup includes events such as goat yoga, a cornhole tournament, carpool karaoke and trivia nights. Click here for a full listing of events.

The Community Foundation is organizing an official Give More 24! Rally in Esther Short Park from 8 a.m. to 10 a.m. According to Jennifer Rhoads, President of the Community Foundation, the morning activities will feature a dance contest led by award-winning fitness instructor Sherri McMillan and a one-of-a-kind doughnut hole competition featuring local celebrities. A variety of prizes will be awarded during the rally, including Apple iPad Minis and AirPods, Fitbit fitness watches and two $250 nonprofit cash bonuses.

“These events are the most important ingredient for building community and inspiring giving because they uplift human connections,” Rhoads said. “Our community, friends, and family are oftentimes the reasons we give, so it’s important to gather around philanthropic efforts.”

Those outside of the area can still enjoy the events by tuning in online via the Community Foundation’s Facebook page, which will be broadcasting live from many of the events. The Give More 24! website will also feature live leaderboards that show which organizations are attracting the most funds and donors.

“There is no other day where we get to see such a collective impact on local causes,” Rhoads said. “It’s a special day that lifts up the important role nonprofits play in our community and the many reasons that each of us gives. In doing so, it generates thousands of gifts for a variety of missions.”