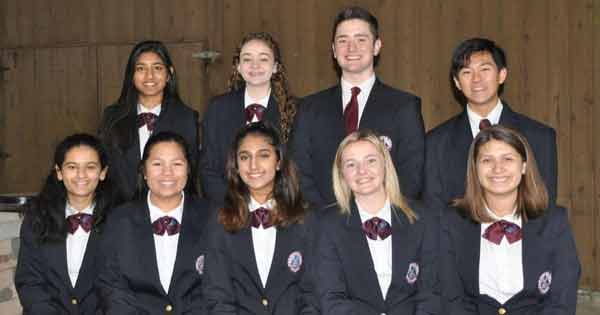 Many children grow up wanting to be doctors or nurses. Only a few follow that dream into high school and beyond. Grace Melbuer is not only pursuing her dream of working in healthcare, but she is also making it easier for other students to pursue theirs.

When Melbuer was a freshman, she founded the Ridgefield High School chapter of HOSA, a student organization for future health professionals. Science teacher Shannon Hemrich said, “Our biomedical science program required that we have a leadership group called HOSA. Grace really got the club off the ground.” The club started with just seven members. Now that Melbuer is a senior, the very active HOSA group has 30 members.

HOSA’s primary mission is to help students become future leaders in healthcare. Under Melbuer’s leadership, students started a job shadowing program with PeaceHealth Southwest Medical Center. The group also invited healthcare professionals to speak at their meetings so they could learn about different careers in the industry.

Winning first place at state competition gave Melbuer automatic entrance to the international competition, where she competed against students from all over the U.S., Canada, Mexico, and China. “I was expecting there to be a good amount of people in my competition,” Melbuer said, “But I’m from Ridgefield, so the biggest testing environment I’ve had is, like, 30 kids. So walking into a room with 650 kids is kind of weird and overwhelming. The kid who was sitting right next to me was from China.” When results were announced, Melbuer was thrilled to find that she placed tenth worldwide.

Melbuer was also elected regional vice-president, one of six representatives from Washington state. As a state officer of HOSA, Melbuer traveled to Washington, DC for the Washington Leadership Academy. There she had the opportunity to meet with Congressional members and staff to advocate for Career and Technical Service Organizations (CTSOs) and to provide a student perspective on the healthcare industry.

Since this is Melbuer’s senior year, she is excited as she plans for other members to take over leadership of the organization she founded. “That has been my main goal this year,” she said. “We wanted to make sure HOSA remains strong.”

She is also excited to continue HOSA’s tradition of community service. “Our next blood drive is on my 18th birthday! I don’t need to sign a permission slip anymore. I think I’m going to donate on my birthday,” she smiled. “What a way to celebrate!”