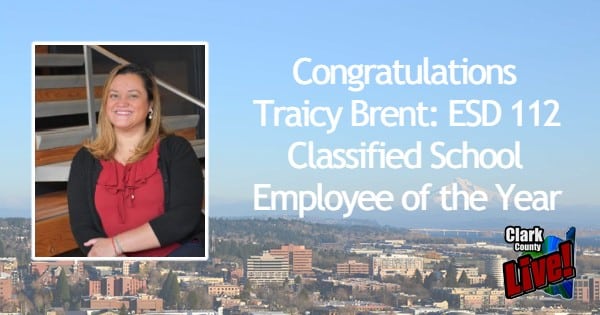 ESD 112 has named Traicy Brent of Vancouver Public Schools as its 2020 regional Classified School Employee of the Year. Brent is the building secretary at Ogden Elementary School, where she has worked for the past five years.

Brent joins a statewide list of eight other regional educational service district finalists for the Washington State Classified School Employee of the Year Award, which is determined by the Office of the Superintendent of Public Instruction (OSPI). The state winner will be announced later this spring.

As building secretary for Ogden Elementary, Brent is often the first face someone sees when they enter the school. Brent prides herself on her welcoming personality and her ability to identify and meet the needs of nearly everyone she encounters on a daily basis. In a school where 38 percent of students are Hispanic and 30 percent are English language learners, Brent’s ability to communicate with students and families in Spanish is a critical component of building an inclusive and welcoming environment at the school. Having immigrated with her family from Panama to the United States in 1994, Brent knows what it’s like to be a newcomer and to have to learn the ropes of a new town, culture, and language.

“One of my greatest joys at work is being able to interact with and support our families who don’t speak English,” said Brent. “Helping them navigate the system, encouraging them to come into the school and get more involved is really rewarding.”

According to Brent, being able to find community in a new place and in new situations is just as important to social and emotional development for children as their practical education is. Brent values her role in being able to bridge many gaps for families, serving as a “cultural broker” to help new families become integrated in their new school and community.

In addition to her daytime work, Brent has been a key figure in implementing an evening preschool program for children and their families since it started in 2016. During the Cougar Cubs classes, she serves families dinner, translates school updates in real-time and facilitates learning activities, helping to provide an enriching experience for families that might not otherwise have access to preschool. Brent also works behind the scenes year-round, sending out regular communications to families who may not have heard about the free program, inviting them to attend.

“Due to [Traicy’s] work communicating about the [preschool] program to more families, we have been able to grow the size of our Cougar Cubs classes each year,” said Ogden Elementary School Principal April Whipple. “This significantly increases the number of our students who are starting ‘kindergarten-ready’ in the fall each year.”

Of her many and varied responsibilities as an elementary school building secretary, perhaps the one Brent finds most meaningful is the role she plays in connecting with students and their families on a personal level. While she greatly admires her teacher colleagues and feels privileged to be able to support and build them up each day, her own ability, and that of other school staff who aren’t teachers, positively impacts the lives of students and is critical in its own way.

“I’ve learned that you don’t have to be a certified teacher to make a positive difference in students’ lives,” said Brent. “That’s something I really appreciate about the [Classified School Employee of the Year] Award. We all have a part to play in making sure that all students can succeed.”

To learn more about the Classified School Employee of the year award, visit OSPI’s website. More information about the state award will be released soon.