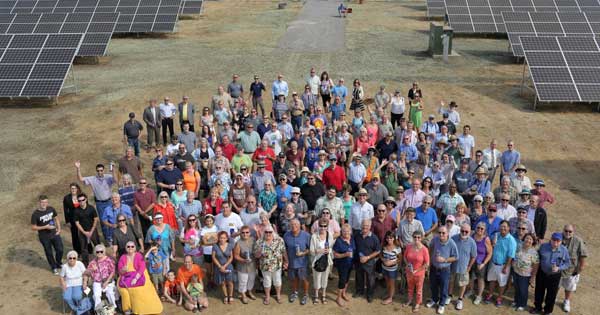 Participants in the Clark Public Utilities Community Solar program will see the largest state incentive returns to date, thanks to a record-setting solar energy production year.

“The Community Solar photovoltaic arrays produced more electricity during the 2019 solar year than any other year since they were installed four years ago,” said Matt Babbitts, energy services project manager at Clark Public Utilities. “As a result, our customers who have purchased Community Solar units will receive nearly a dollar per unit more this year than they did in 2018.”

During the 2019 solar year, the system produced 385,549 kilowatt-hours of electricity—11,675 more than 2018, which was the system’s most productive year since it came online in 2015. Production is metered through a solar year that begins July 1 and ends June 30. Clark Public Utilities’ Community Solar installation was built on utility property located at the corner of Padden Parkway and NE 117th Avenue—a site chosen for its prime solar exposure, community visibility and cost-effective proximity to local electrical infrastructure.

The array was financed through sales of Community Solar units equal to about one-twelfth of a panel. More than 700 utility customers are participants at levels ranging from purchase of one unit, up to 100. Participants receive an annual bill credit for their portion of the energy produced, similar to the utility’s rooftop solar net-metering program. They also receive a Washington State Production Incentive specifically for Community Solar through the year 2020. Although the state incentive ends next year, Community Solar participants will continue to receive the utility’s annual energy credit for the estimated 20-year life of the system.

Clark Public Utilities Community Solar is the largest array in Clark County. In addition to producing renewable energy for the community, it also offers educational benefits for students and adults alike. The project was extraordinarily popular at its creation. Units of the first solar array sold out on the first day. The other four arrays were built due to high demand and sold out in less than a month. On average, each customer owns 10 units of the system. New units cannot be created but can be transferred or sold by current owners if those participants move out of the utility’s service area.