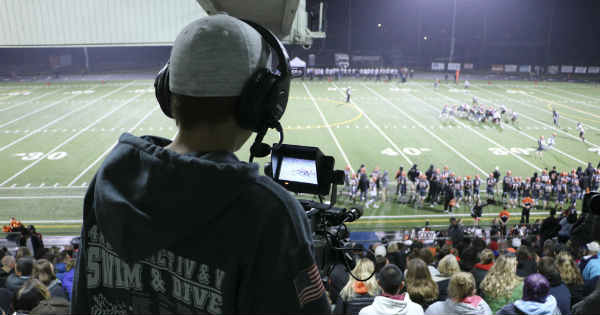 Football, Basketball, Soccer, Concerts, Plays…there’s a lot going on at Battle Ground High School. Did you know that there is another team present behind the scenes? A team of students is working to bring those at home the very same game those in attendance are watching in the comfort of their home.

That’s right, the audio and video production classes at Battle Ground High School spend many hours to broadcast athletic events, school plays, band concerts, and daily updates within the school to your television set at home. These classes are part of the Career and Technical Education program and provide students hands-on learning that can help them with future jobs and continued education. In all of Battle Ground schools, there are about 200 CTE classes taught each semester in 36 different content areas. These classes are taught by teachers who have actually worked in the area they are teaching.

Benjamin Cahoon is a Junior and in his third year in the audio/video production classes. He plans to continue and later work in the industry. “I’d like to work in television and movie production as an editor someday. Working as a director for these live broadcasts has been a lot of fun and a great learning experience. The best part is learning practical skills and gaining experience that could lead directly to a job someday.”

If you live in Battle Ground and have Comcast as your cable provider, you can see the programs created by Battle Ground High School students on channels 27, 28, 328 (high definition), and 29 all in part due to a partnership that has been in place for 40 years. This has been all been made possible by the Vancouver Educational Telecommunications Consortium also known as TV ETC, a non-profit partnership between the school districts in Clark County that is financially managed by the Educational Service District 112.

Cable television became available in Battle Ground in 1979. At that time an agreement between the City of Vancouver, Clark County, and the cable company was made to set aside channels that will serve the local communities. As part of the original agreement, every Comcast subscriber pays a $1 fee per month to fund these channels.

TV ETS Coordinator at ESD 112 Rose Yandell said, “These channels serve as an invaluable communications tool to inform the community about what’s happening in our local schools. The partnership also provides a hands-on learning experience for students who participate in the broadcasts, as well as grant funding to help equip the school programs.”

Schools can request Public, Educational, and Government Access Capital Fund Grants through TV ETC. The grant requests are reviewed by a volunteer advisory Telecommunications Committee. They make recommendations on the grants to the Vancouver City Council and Clark County Commissioners for approval. More than $400,000 has been granted to Battle Ground Public Schools since 2000. These grants pay to upgrade cameras, computers, software, and other broadcast equipment. This year, they are requesting a grant for $19,352 to be able to upgrade equipment and broadcast things in slow motion such as replays during sports games just like the pros do.

The range of classes provided at Battle Ground High school includes beginning and advanced video production classes with a live production studio, non-linear edit stations, and digital cameras. Students learn the fundamentals of video production, story development, live television production, teamwork, and professionalism. They are then able to take what they learn in the classroom and use it when they are broadcasting sports or other school functions.

Joey Daniels, Junior at BGHS said, “I like that I can work outside operating the cameras at sporting events, or I can be inside helping with the graphics programs during the live broadcasts. Then in the class, I can learn the editing process from making commercials and promotional spots for the BGHS news station. There’s always something new to learn, and it’s never boring.”