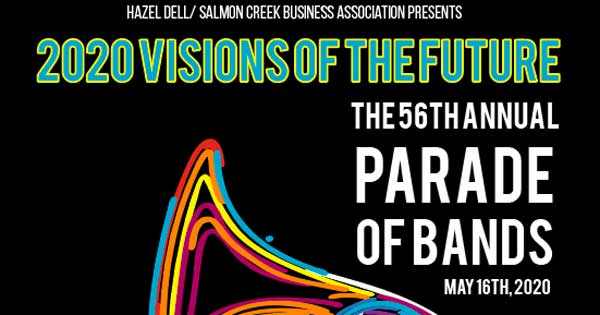 The following information was released by the organizers of the Hazel Dell Parade of Bands.

We’d love to say the Show Must Go On, but we can’t.

For the first time in the 56-year history of the Hazel Dell Parade of Bands, the current environment forces the cancellation of the Parade.

There are an unbelievable number of moving pieces to plan, promote, and produce the Parade. From coordination with school bands and Public Works, to cooperation with the Sheriff’s Office and local business sponsors. And because of the COVID-19 outbreak, all these efforts became impossible to undertake.

According to Tony Reustig, President of the Hazel Dell/Salmon Creek Business Association, “The most important part of this decision was knowing that the Parade brings 20,000 participants and spectators together, and we needed to be cognizant of the safety of our community with the current uncertainties around the coronavirus.”

The Parade of Bands has been presented by the Hazel Dell/Salmon Creek Business Association since 1964, and is one of the largest and most popular parades in the Pacific NW. The 2020 event, themed “Visions of the Future” was set to celebrate our youth and outlook for the future. We had three inspiring Grand Marshals who exemplified that positive vision: Keoni Ching of Ben Franklin Elementary School, Alex Miller of Columbia River High School, and Lili Boyer-Quick of Skyview High School.

“The Parade is an annual showcase of community spirit,” said Brad Lothspeich, Parade Co-Chair, “but with more than two dozen school marching bands, and upwards of 150 entries, it became obvious that we couldn’t simply postpone the event. We’re all incredibly disappointed, but we know it is the right thing to do.”

In addition to the work of the Hazel Dell/Salmon Creek Business Association, dozens of volunteers spend thousands of hours bringing this event to the community. Ultimately, we were not able to confidently present this iconic community event in a manner that we knew would be entertaining – and most importantly, safe – for everyone involved.

To the tens of thousands of Parade participants, spectators, and supporters, we thank you for your ongoing support of the Hazel Dell Parade of Bands. We will miss you this year, but look forward with great anticipation to the 2021 Hazel Dell Parade, scheduled for Saturday, May 15, 2021. See you there!